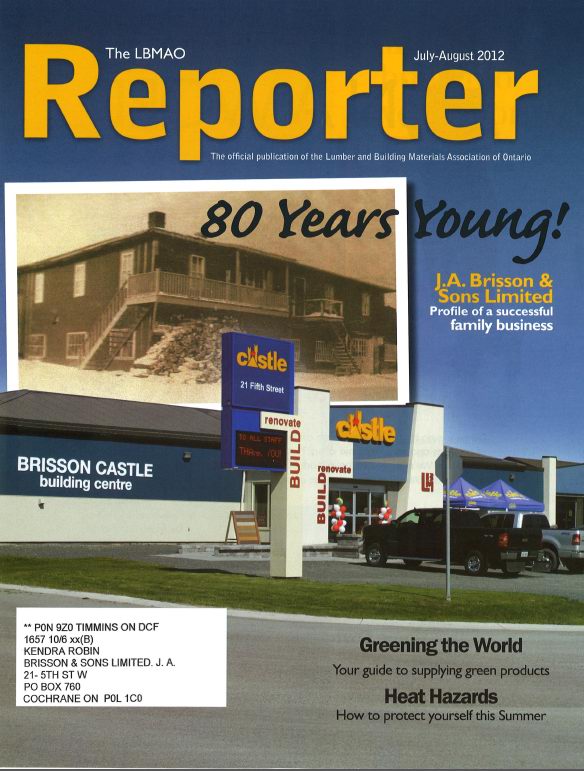 Source: The LBMAO Reporter, July-August 2012
Written by: David Campbell
Many of us who live in large urban areas such as Toronto and Southwestern Ontario, don’t quite understand what attracts people to reside in Northern Ontario. We have access to a wide selection of shopping for groceries, clothing, hard goods, etc. We also have the amenities provided by larger metropolitan areas, including health care and education. To better understand why people are attracted to Northern communities, one just has to spend some time in the Northern Ontario town of Cochrane.

I had the opportunity to visit J.A. Brisson and Sons Limited, a Castle building supply dealer, during their celebration of 80 years in business in Cochrane, and came away with a sense of respect and understanding of the northern lifestyle. Owner Kendra Robin, her husband Paul and son Keven, invited the community to help them celebrate. They had a charity BBQ with the mayor of the town helping out and it would appear that most of the townspeople came to enjoy the festivities. The local business improvement group, as well as competitors, dropped in to congratulate Kendra, Paul, Keven and the entire staff for their service and dedication to the community. You really felt a sense of community that you wouldn’t feel in the hectic dog-eat-dog world of the big city!

The business was established by Joseph Albert Brisson in 1932. Albert, the 8th of 12 children, was born in 1902 in St. Amicel, Quebec. The family left Quebec and moved to Casselman, Ontario. In 1922, Albert moved to Northern Ontario to work in the bush camps but on the way stopped in Cochrane to visit a brother-in-law, Camille, whose father, Louis Sequin, owned a manufacturing and retail business making windows and doors. Albert was hired and worked there for the next 10 years. On Friday, February 12, 1932, Albert purchased the assets of the bankrupt “Cochrane Woodworking Manufacture” and started the Cochrane Sash and Door Factory on property (located on 5 lots) rented from the town of Cochrane. In 1938, he purchased the property for $600.00 – the amount owed by the previous owner in back taxes. Albert’s dream of truly owning his own business remained his passion for years to come.

Under the guidance of Albert, the business thrived and expanded. In February of 1953, Albert purchased an additional 5 lots in town to use as a yard for trusses, lumber and storing pre-fab homes. They now had that as well as a retail store downtown. The decision was made to change the name to J.A. Brisson and Sons to recognize his two sons, Gerald and Alain. In the 50s and 60s, with the economy driven by timber harvesting, milling and the added bonus of mining in the area, the business prospered. They supplied materials for, and also built, many of the homes in Cochrane and surrounding area, spreading from New Liskeard to Hearst and Moosonee – Gerald being responsible for the retail end and Alain for the construction. In 1962, Gerald decided that the big city life would be more fun and moved to Montreal.

Alain Brisson had started working full time in the business in the late 40s under the direction of his father whose philosophy was “You must start at the bottom of the ladder and not the top in order to learn” so Alain did every job in the business including truck driver. In 1970, Alain became an owner and that year the downtown location was moved to the yard location where it still exists today. At this time, the decision was made to join the “Wiseway” group and they expanded the retail store to 6000 sq. ft with an additional 4000 sq. ft added 1972, along with a 6000 sq. ft warehouse. Alain was joined by his son and daughter, Daniel and Kendra, who, like him, had to start at the bottom of the ladder. Eventually, Kendra became the financial controller and Danny the manager.

“In their first 60 years, they employed three generations of workers in the same family.”

In 1977, Alain (in partnership with Raynald Blouin) purchased BCD Building Supplies in Smooth Rock Falls. Wiseway Home and Building Centre in Terrace Bay was purchased in 1978 with the shareholders being Alain Brisson, Raynald Blouin and Robert Gendreau, a long-time employee of Brisson’s who moved his family to Terrace Bay to manage the business. In the same year, they also purchased a store in Longlac and operated under the Wiseway banner. Roger Charron, another long-term Brisson employee, moved to Longlac to manage that business. The additional 3 businesses were sold off in the early and mid-80s to better concentrate capital and time in the Cochrane store.

Brisson’s, over the years, was a major employer in the communities where they did business and many employees had up to 25 years of service with the company. In their first 60 years, they employed 3 generations of workers in the same family.

In the mid 80s, Alain was looking towards retirement and was in the fortunate position of having a daughter who grew up in the business and who was more than capable to manage and run this vibrant retail store. Kendra took the reins from Dad in 1986 (she had been partner for the previous 13 years) and took it to the next level by expanding product lines and merchandising to meet the needs of the community. Using the services provided by Castle Building Centres, they have positioned their business as a major building supply centre offering the scope of service and products comparative to what’s available in larger urban centres.

Succession planning in most of our member retail businesses is challenging in respect to keeping the future generations interested in taking over the business. Brisson’s has been fortunate to have family members who feel that service to the community is as important now as it was when Joseph started the business. Kendra and Paul’s son returned to the business in 2005 after several years of working in the GTA “rat race.” Keven (who has a legal background), his wife and their two children made the decision to revisit their roots and come back to Cochrane, a decision they don’t regret. Keven, working with Kendra, is the next generation to take Brissons’ to new levels. He is moving the business forward and he feels that social media (Twitter, Facebook, etc.) is the next step to meet the needs of their customers.

When asked about the biggest challenge to their business, both Keven and Kendra said it was projecting growth. Cochrane is experiencing an economic boom; mining is driving the expansion of building with more people moving to the community. Last year, they enjoyed a 30% increase in sales. How do you project this coming year and the following years? A nice challenge to have!

On behalf of the Board of Directors and members of the LBMAO, we wish Alain, Kendra, Keven, their families and employees all the best and look forward to presenting them with a 100-year plaque in 2032!